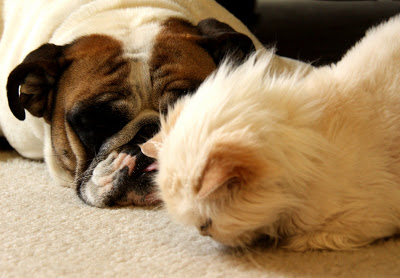 Beige gloves, and turquoise scrubs, she carries a generic spray bottle marked with a Sharpie: rubbing alcohol. The syringe contains an inch and a half of gem tone blue-green liquid. We are told there is a vein on the inside of the back leg she can sometimes find without shaving. No more than five pounds, the cat is easily pushed on her side.
A Persian cat’s fur is fine—so fine that it easily mats, the tangles cinching the skin tighter and tighter as it grows. In desperation, a few months ago we had her shaved, keeping the fur long around her face and feet and tail—the look of a lion.
The vet sprays a stream of rubbing alcohol down the inside of her leg. The cream point fluff that remains on her leg is immediately transparent, the purplely vein clearly visible. A rusty red towel had been given us to lay her on while we wait. Notably used, faded. Down on his haunches, my husband’s trying to get Puddin’ to look at him; he makes a little sound in the back of his throat that she used to answer. Once again standing over her, he bends closer and gathers her into his hands. He puts his face down into the mane. Inhales deeply. Two, three times. 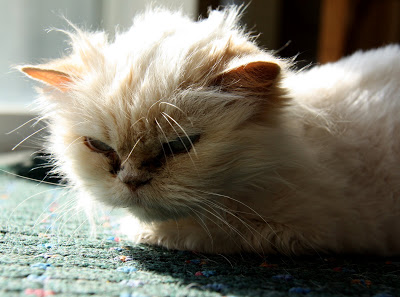 Sorrow can be looked straight in the face only for small moments. He turns steps over by the sink. Looks at the paper towel holder, the way he would read and re-read a cereal box in the morning. Eager for a distraction he puzzles over a white piece of plastic on top of the apparatus, then reaches up and touches it. The whole front of the machine flops open, revealing the twisted and complex inner-workings of something as simple as drying your hands.
We laugh.
Then the door opens. The vet is kind, kindness looking like slow movements and the sort of smile where lips cover the teeth with the downward turn of resignation that will wait or continue— whatever we need. She says it’s an anesthetic, just a little first to take the anxiety and then an overdose. Sleep. Then sleep redefined.
Within a second or two Puddin’ tips her head sideways as if she suddenly needs to lay it down. 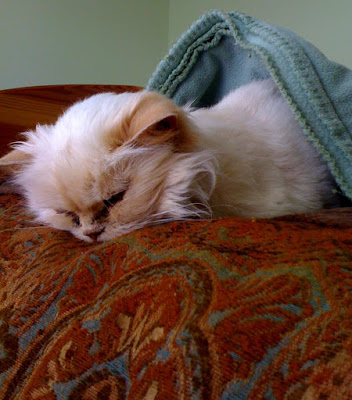 No one really knows when life stops,
how death can happen with eyes open. We both try to pet them closed.
That I had scissors in the purse I call My Abyss, was surprising and not. We clip fluff from the top of her head and off the end of her tail. A beginning and end I’ve left it on the dresser wrapped in a tissue. What do you do with the remnants, the thirty seven pictures I took three hours ago. Tomorrow. Two years from now.
Mercy and killing, I’m not sure how to put those words in the same sentence without trembling. One person insists it’s severe grace. Another, mere convenience.
`
Previous Post: « Soweto Slum
Next Post: Time Change »